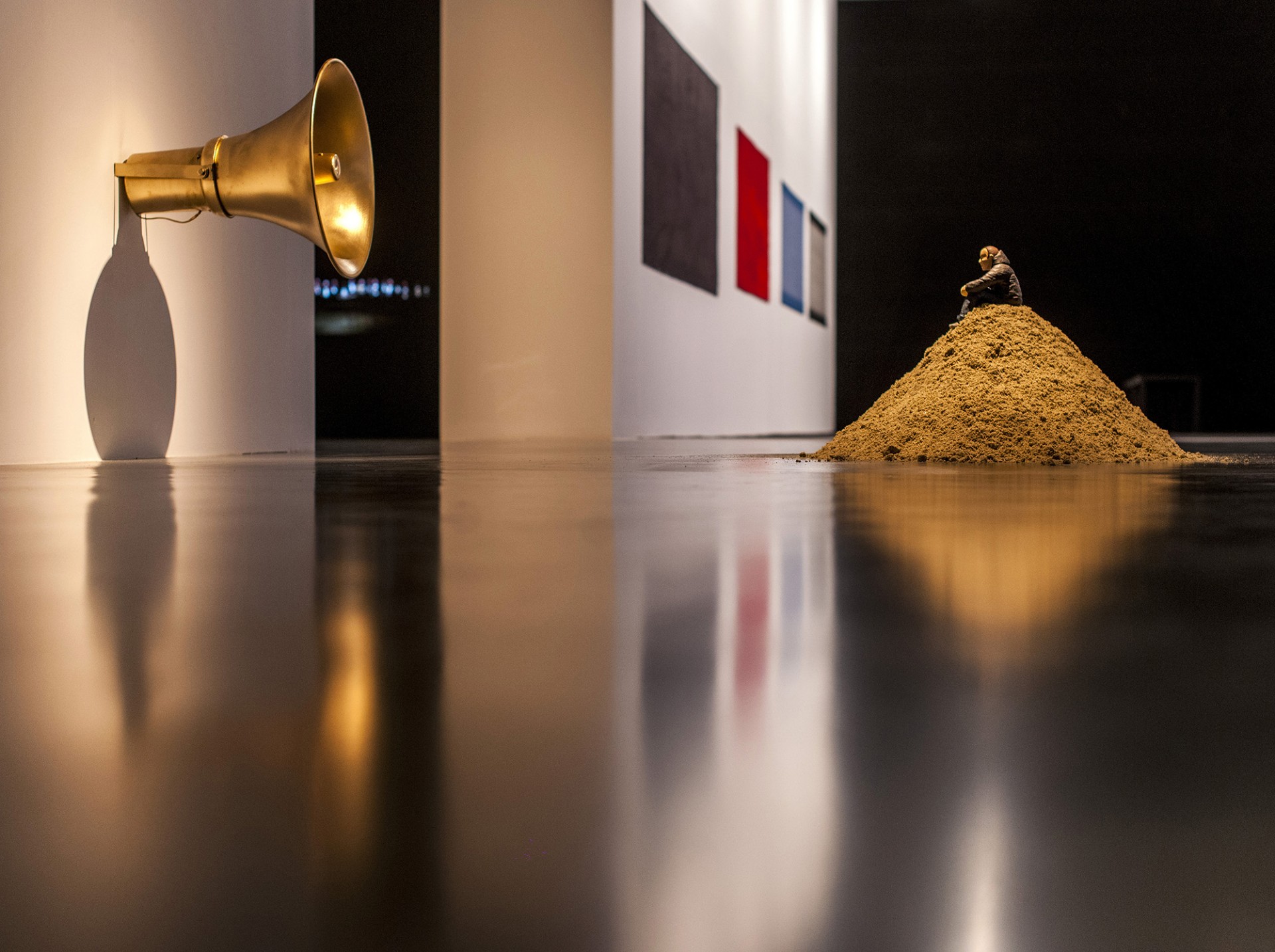 Vahit Tuna describes himself as a graphic designer and does not distinguish between art and design, working in both fields. Designer of many prominent art publications and artist books in Turkey, he is also a blogger and a musician, and the founder of an artist run space “Masa” that can be transported to different places,. All in all, he is a versatile “arts and culture” figure. Tuna composes music and sound for diverse art events and dance performances and uses sound as a determining element in his art projects. For his solo exhibition he installs sound in the space and created an exhibition soundtrack so as to pull the entire gallery together and create a sense of unity in between his works. In his photography, graphic designs, videos, and installations, Tuna generally questions and deconstructs the conventional, with an aim to make the audience question it as well. Drawing on a large pool of references, ranging from the masterpieces of the global history of art to pop icons, the artist applies an aesthetic of his own to interpret topics such as the concept of status quo, social norms, nationalistic reflexes, power and the media, as well as various government propaganda apparatuses, freedom of expression, and mass disinformation. His works always imply subtle meanings and criticism, and the reason that at first glance they seem to be simple, colorful, and even cute is the mischievous and playful aspects of his style. Thus, through alienation, he can suggest to the audience the covert meanings and functions of everyday situations and devices. For example, by using an ordinary mop, a loaf of bread, a pair of jeans or sandbags, he can decipher the cultural and political codes of society in a particular period. In his works, Tuna prefers to use his own mode of representation when needed and chooses either to render absurd or give meaning to the identity of the artist and the individual via himself.

In his 2008 installation “Sunshine”, the artist uses again his own figure. A male figurine made of clay, i.e Vahit Tuna, is perched on a sand dune. The figurine is dressed casually and sits with his hands clasped around his knees, looking across to the horizon from a hilltop. Yet at the point at which he gazes, instead of the sun we see a shiny golden loudspeaker. The vibrations of the commanding voices played in a loop from the loudspeaker have eroded the front part of the pile of sand. While this erosion represents the strength of puissance and its abrasive aspect, it also points to the use of sound and music as apparatuses of power and repression. As a sound source, the loudspeaker is a device that represent political power, from election campaigns to public announcements. One can see the passive resistance of the individual or the artist in the figurine, who continues to gaze at the sun without going anywhere, but does not react either. There is a melancholic aspect to “Sunshine”, which calls to mind as much a feeling of solitude as the desire to protect and abstract oneself from any kind of power, or to choose to be on the side of the viewers.

“We were always spectators, we always scrambled for the tickets to become spectators, now there are more ‘things’ to see and tickets are never sold out…”